Massivivid: The Most Obscure Gem of the Christian Music Scene

Ok, so the fact I was able to even buy the domain massivivid.com for ~$10 is a very sad thing. It means the band I loved so much and grew up listening to on repeat is so niche and tragically under-appreciated that it’s almost unsearchable these days. {insert melodramatic emoticon here}.

Massivivid represents to me everything that was good and excellent about Christian music in the 1990s. Not only Christian music, but honestly ANY music that came out in the 90s or early 2000s!

Feel free to disagree with me at your own peril (please use the comments below). But the 90s were the era of the GREATS in Christian music: Jars of Clay, DC Talk, Newsboys, Third Day, Audio Adrenaline, Deliriou5, PFR. They put good Christian music on the map. Then came the real outliers and niche music: Project86, Five Iron Frenzy, Grits, Pax217, POD, Guardian, World Wide Message Tribe, Supertones, etc. This was the music your parents at the time (if they were like mine) had to snatch the album booklets away from you and read the lyrics for themselves because they were convinced you had pulled one over on them–for how could good, loud music that actually appealed to our senses be Christian music??

But the jewel on the top of the entire scene–that transcended all other music of its generation–came from an extremely little-known band of misfits who called themselves Massivivid.

In 1999 Massivivid put out an album that, for me and many others “in the know,” could not be topped. It 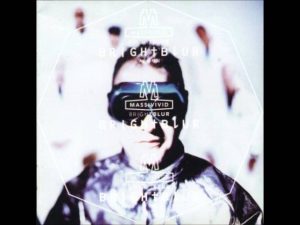 stood alone. To this day it STILL stands alone: Brightblur. The music is vibrant and edgy; it was a hard genre at the time to define, as few (certainly none in the Christian circles) had ever attempted it before. Industrial and/or Electronic sums it up the best, but the melodies also exhibit strong elements of hard rock, techno, grunge, all interwoven with incredible, intricate guitar work and powerful synths.

Some have (quite incorrectly) mislabeled the band as trying to be an imitation of NiN’s sound. But, to me, this assessment lacks depth or any critical thinking, as the music exhibited in Brightblur is not only lyrically leaps-and-bounds above the often vapid NiN lyrics of the same time period, but also the synths are more pronounced, the rhythms are more clean, and the end-to-end product is more rich and soulful. Subjective? Certainly. But since you’re on a Massivivid website right now I imagine you agree with me. Feel free to comment below…

I concur completely with the way Scott Beeson summed up his review on the album’s Amazon page:

I like lots of Christian music that nobody has ever heard of, but Massivivid has to be my favorite. This first album, Brightblur, has it all. The lyrics are outstanding. They’re not watered down, they say what needs to be said. Musically, this album is amazing. The first songs get crammed in your head until you forget everything else exists. This first set of songs climaxes with an emotionally ravenging tune called Epitome, moves on through to the tongue-twisting Crop Circles then [segues] out to the next set with the odd, screaming Deep Heaven. Now we have arrived at tracks 10, 11 and 12 and it is just unbelievable the way the three songs build and build and build. They are the pinnacle of rock ballads; mellow yet startling. I cannot even describe the emotion and physical compulsion these songs bring. From there, it lightens up and finishes off with a couple remixes and even some downright hilarious studio blurbs. – Scott Beeson

In my opinion: 20 years later their music still holds up. It is truly a shame they didn’t produce more. I am convinced if they didn’t have the word “Christian” in their genre and if they had been blessed with just a modicum of radio airtime, they’d be millionaires like Trent Reznor and might still be producing music today. As it stands, of their two albums Brightblur is the only one that received any real recognition. And I highly doubt it made Wally Shaw or Mark Nash any real money.

In fact, Brightblur is the only album which can even be found/purchased…anywhere! Their second album “Dressed To The Nines… Armed To The Teeth” is virtually a ghost record. If you were lucky enough to buy it in 2002 you probably own one of the only surviving copies. I’m not kidding here, people – it’s impossible to legally buy. If you own a new/almost new copy of the original CD, PLEASE email me as I will gladly purchase it from you at just about any price.

In fact I’ve spent, off and on, about 4 years looking for a copy of Dressed To The Nines… Armed To The Teeth. It is simply not available anywhere. The obvious places like Ebay, Amazon, iTunes, Spotify certainly don’t have it. The only place that once used to have the songs from the album was Grooveshark–and we all know what happened to it. So the album is now a collector’s relic of the past, sadly unavailable even for those who are actively searching for it.

EDIT: I FOUND IT! Working with the former manager of the band, I have procured multiple copies of the Dressed To The Nines album (still new and shrink-wrapped!) If you’d like to purchase a copy, click here.

In summary, if you’re on this website you probably already understand and appreciate the genius of Massivivid and the revolutionary impact they might have made on your life. They are not just a “great Christian band,” but a great band overall. Their influence on my youth as well as on my appreciation of the entire genre could not be overstated. If you have not heard their music I strongly encourage you to use the link on the right to buy it on Amazon. I can only hope that some legacy royalties are still slowly trickling into the talented artists who made this art.

21 thoughts on “Massivivid: The Most Obscure Gem of the Christian Music Scene”